Home »Computer»How To Check Your Antivirus Is Working or Not

PC Security is one of the most concern among the computer user now a days. To keep your computer malware free you have to use a antimalware programme. There are a lot of antivirus software in the market. Some are free and some are costly. But have you ever tried to know that your installed antivirus is working properly or not? Well, there is a simple way to test the efficacy of your antivirus software. This is called EICAR Test. EICAR stands for European Institute of Computer Antivirus Research. I hope that you take care of your personal computer. Without that you will lost manu valuable data as well as your pc to virus.

Check Your Antivirus Is Working

It is known as the “EICAR Standard Anti-Virus Test File”. It is safe, because it is not a virus, and does not include any fragments of viral code. Most antivirus detect it as a virus (typically report it as “EICAR-AV-Test”). This is a legitimate DOS program.

It is also short and simple.

Open Notepad. Copy this code and paste it there. Save it as eicartest.com. 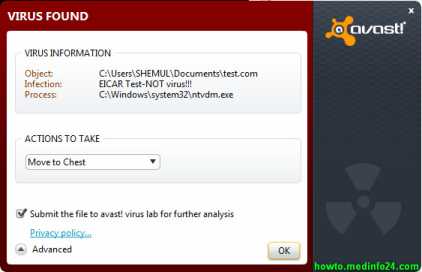 If your antivirus is active it would detect it as virus. But Don’t worry, as it is not a virus. If it is not detected instantly, open the file. If Now your antivirus Fail to detect this eicartest.com file, Its time to Change your Antivirus.

Now Put it inside a ZIP file by Winzip or 7Zip. Run the AV Scanner, your antivirus should detect it as virus. Or download this Eicarfile in Zip. Test the downloaded file.

Hope your Antivirus is working fine. You may try Security Section.